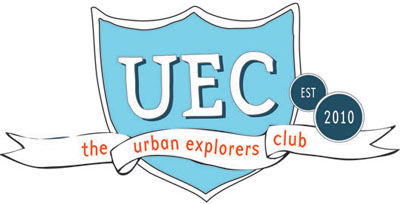 Liz Danzico from SVA was just in town for a visiting designer workshop on serendipity. This was quite serendipitous as its one of my primary inspirations in my thesis thinking. Our prompt was to create a digital and physical object or service that would increase the opportunity for chance encounters in Providence. My team (me, jane and marc) got lost in the spirit of the project and came up with a plan that we all hope to develop fully.

Friday, on our way to lunch to discuss the brief we intentionally took a new route to the jewelery district. After seriously considering a random tour of JWU we headed south and found ourselves staring right at the abandoned highway slated to be torn down one of these days. Instead of passing under it as usual we decided to hop on the highway and see what was up there. It was incredible. We were all a bit unsure and discombobulated by the thought that we were walking on a freeway (regardless of the fact that it was closed to traffic). We passed under exit signs, discovered tiny details amongst the cracks and climbed around stacks of construction materials. We saw the city from a totally unfamiliar perspective… the river, the power plant and bridges we know well but not from this height, angle or pace.

The project brief gave us permission to take time and wander the city, free to discover whatever crossed our path. We had no agenda and no place to be. At lunch we were unclear if the highway itself would be our site to create chance encounters, or if it was the abstract inspiration to create an opportunity for others to discover this site for themselves. We opted for the latter and the Urban Explorers Club was born.

We wanted to develop a mechanism giving other urban explorers that same permission we were given to rediscover the city around them. To notice the great signage, little details and moments of chance that abound in the everyday but usually go unnoticed. These can be small (a great logo on the side of a truck) or large (like the walk on the highway or a conversation with a stranger) but either way they cause you to take time out of your routine and ideally, be inspired to share the experience with others.

To encourage this we created a website with twitter feeds providing a large portion of the content along with feature stories and photo essays that cultivate curiosity but leave enough of a mystery for one’s own discovery.

Membership begins by taking the following oath:
I solemnly swear to exemplify a courageous curiosity and a fearless wandering. I will savor serendipity. Neither rain nor snow, nor the fog of daily routine will keep me from meandering. I will take three lefts instead of a right. Google maps is my enemy. I will share what I find with others but will not spoil the adventure for those who follow. The spirit of discovery will guide me.